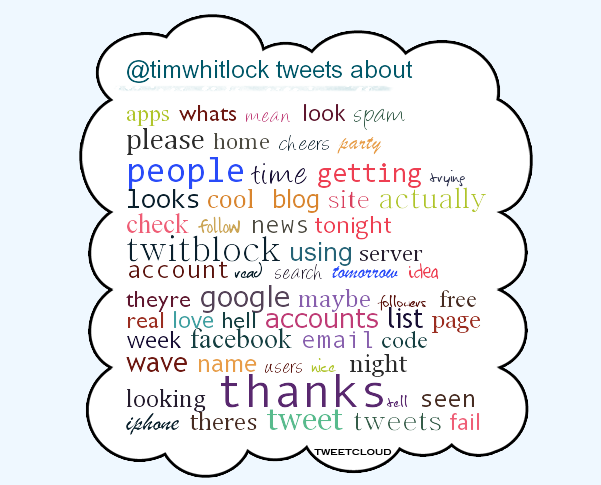 I woke up this morning to the apparent viral spread of the TweetCloud app that unoriginally, but very nicely displays your most tweeted words of the year, or month, or .. you get the idea. Here’s mine ->

If you’re impatient, you may wish to skip to the good bit.

Now, how did this app manage such spread when there are so many like it? Possibly because it tweets from your account when your results are ready. This is not uncommon and it can be a nice feature that I might recommend. With the difference that it should be a 100% opt-in feature. TweetCloud’s start button says “make and tweet cloud“, so it does warn you. But people don’t read – they click.

TweetCloud insists that you log in before you can use it. It uses OAuth for this which is good (+1 point). Doing this means it can make calls to the Twitter API within your hourly request limit, rather than exhaust its own. (useful if you’re not whitelisted). But the real reason you must authenticate with TweetCloud is so that it can update your status. When building an app you have to seriously justify asking the user to authenticate/register etc.. As a general rule, the user should see that this action is for their benefit, not yours.

Good examples of this done right would be:

Both of these apps make the tweet opt-in each time.

While TweetCloud was busy generating the cloud (which took a minute or so) I dived off to my Twitter settings and revoked the permission I had granted the app. If you don’t know how to do this, it’s under “settings > connections”, or here: http://twitter.com/account/connections

As soon as you revoke this permission the app can no longer use the access key that it has obtained. It needs this for any API call that must be authenticated. e.g. getting your public timeline of tweets does not require authentication, whereas updating your status does.

Interestingly the cloud generation continued to churn away. This suggests that the app was actually paging through my timeline without even using authentication. i.e. making public API calls under its own rate limit.

I also decided to post my cloud as a TwitPic, just to say … well, you know.  TwitPic doesn’t use OAuth, which it should, but that’s another post.

A few other things to note about “connections”: